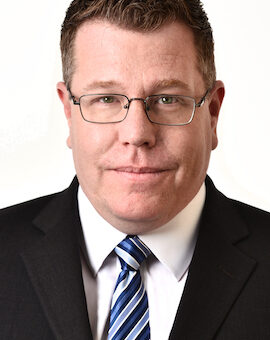 Derek began his practical experience as an intern at the Los Angeles County District Attorney’s Office where he assisted in trial preparation for the major crimes and homicide divisions. In 2016, he served as a judicial extern to the Hon. S. James Otero, Federal District Judge for the Central District of California. At the Pepperdine University School of Law, he assisted Professors Harry Caldwell and Derek T. Muller in legal research on prosecutorial misconduct, election law, and California Supreme Court criminal cases. He also clerked at Lewis, Brisbois, Bisgaard & Smith.

Derek was admitted to the California Bar in 2017 and is licensed to practice law before all courts of the State of California and the United States District Courts for the Central and Eastern Districts of California.

Derek is happily married to a wonderful woman with whom he has two children: a daughter and a son. He is an avid reader, SCUBA diver, and football fan.

Derek earned his Juris Doctor from Pepperdine University School of Law, graduating cum laude in 2017, after graduating from the University of California, Berkeley with a Bachelor of Arts in Philosophy.  While in law school, he was a member of the Pepperdine Law Review’s Editorial Board, and served as its Essays, Reviews & Digital Media Editor. He held positions on the school’s Trial Advocacy and Phi Delta Phi Legal Honor Society Boards and received CALI Awards for earning the highest grades in Healthcare Law and Organization, Federal Courts, and Criminal Procedure. He also took first place at the ABA Section of Labor & Employment Law’s 13th Annual Trial Advocacy Competition in Los Angeles in his final year.  At graduation, he was awarded membership in the Order of the Coif and the Order of the Barristers, and received the Parris Institute for Professional Formation’s Excellence in Professionalism Award.